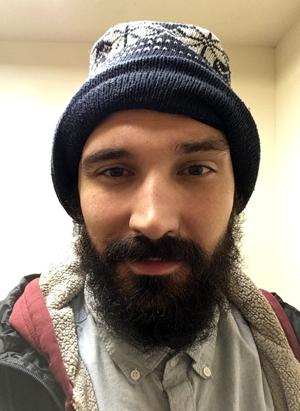 Traveling comic performs for the homeless

CRESTVIEW — When comedian Elvis Mujic came to town this week, he was a man on a mission.

Mujic has toured 47 states in the minivan he calls home, and one of the things he loves most is performing for homeless people. He visits organizations like the Salvation Army and asks around to find out where homeless people congregate so he can perform especially for them.

On Jan. 2, he contacted the Crestview Area Shelter for the Homeless for permission to do some standup for their clients. Mujic entertained them for about half an hour.

Mary Bayer, a volunteer at CASH, said, “It was the first time we’ve ever had anybody like that come in. It went wonderful. The folks really enjoyed it and it kind of got them away from their own problems, you know. It was very fun!”

Bayer said she was eavesdropping from the kitchen during Mujic’s routine. He told jokes about himself, and talked about being from Bosnia.

“I would like to see him come back again,” Bayer said. “Anything that brightens up their day, I’m for that.”

Mujic said he takes a different approach when performing for the homeless.

More of a warm up is required for the homeless to begin enjoying themselves. He interacts with them and tries to lift their mood by being playful and positive.

“It’s super challenging. I like it,” Elvis said. “If I can do it there — if something works for them — if it makes them laugh, it’s a very funny joke.

“I don’t always pull it off, but it is possible and when I do it (well), it validates it,” he said of his work.

An aptitude for the job

Mujic and his family moved to the U.S. when he was 7 and grew up in Detroit.

Before he became a comedian, he was a working student starting his fourth year at a Massachusetts college.

In the break, he decided to challenge himself to lift his spirits, and hiked the Appalachian Trail for five months.

He tried returning to school, he said, but couldn’t. That’s when he found standup comedy — it was a fit.

“It’s all sort of a slow progression,” he said. “What I vividly remember is doing it and feeling, ‘Oh this is very right.’”

His parents have come to accept his decision.

“I’m 29. I’ve done stuff like this for a long time,” he said. “At this point they understand. It’s a good thing and they’re good people.”