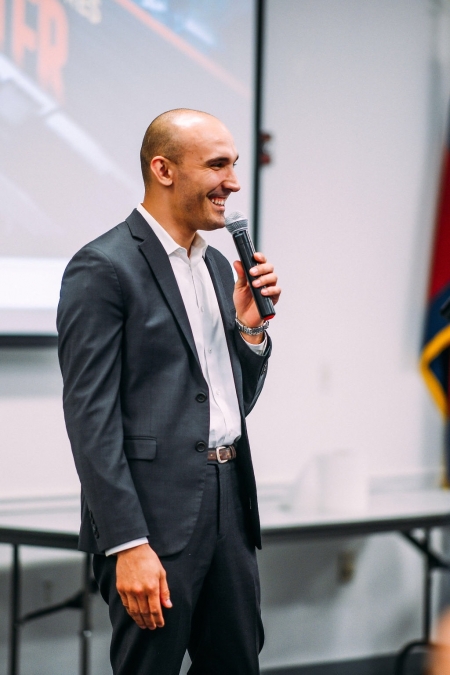 Traditionally, homeless shelters serve as temporary residences for individuals and families. They exist to provide residents with safety and protection from the harsh conditions of living outdoors. Now, thanks to Elvis Mujic, a 30-year-old, stand-up comedian, people view shelters as a place to laugh and converse with their local community. While shelters aren’t commonplace for stand-up sets, Mujic says he finds joy performing in untraditional settings. 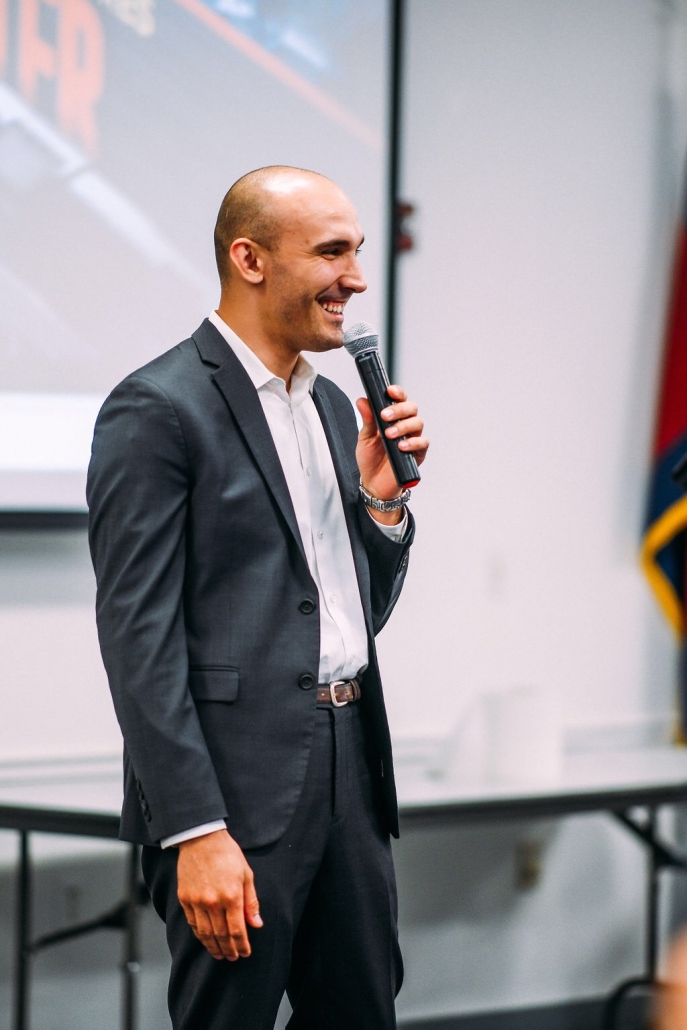 “Entertaining feels a bit selfish to me, possibly because it’s standing in front of a crowd to hold their attention. However, this [performing at shelters and collecting goods for the underprivileged] feels a lot better,” Mujic said.

Mujic contributes more than just comedic relief during his performances. Sometimes things don’t go as planned and shows can serve as an outlet for those in the audience who want to share their stories and perspectives.

“I performed at The Salvation Army chapel in Jackson, MS a few weeks ago. I do my best to plan out a show, but sometimes things happen that I can’t control, and sometimes it turns into a speaking event or a debate. I have experience living in a van. Not necessarily living in poverty, but I’ve faced inconveniences, so I can relate to some of the issues that people in shelters face. I created a moment to be encouraging to the residents and we ended up discussing whether they can get past their hardship. It was great and everyone was friendly after the show,” Mujic said. “Sometimes it’s hard to tell if people are enjoying themselves because it’s not your average comedy show and you’re in an area where there are lots of distractions and interruptions. For example, sometimes people will poke in their head and say, ‘Okay, hey it’s time to eat,’ or phones will ring and I’ll have to answer them and deliver a message,” he added.

Mujic was born in Bosnia, then known as Yugoslavia. His parents decided to give him a western name so that he would not have an Islamic name during a time of Islamic religious intolerance in Yugoslavia. His family moved to the United States when Mujic was seven years old and settled in Detroit, Michigan. He briefly studied philosophy at Amherst College in Massachusetts but left to pursue a career in comedy once he discovered joy in lifting others’ spirits. He lived in a minivan between 2013 and 2016 and traveled to 47 states, practicing his brand of guerrilla comedy.

“I don’t know what made me go into comedy, but I tried it, and I loved it. It felt natural. I performed at one shelter in Mississippi years ago, to try something different, and I always remembered how it felt. I thought to myself, ‘Well, who knows what life will bring? I have the chance to do this now, and I want to make sure that I can say that I’ve done something positive with stand-up comedy,’” Mujic said. 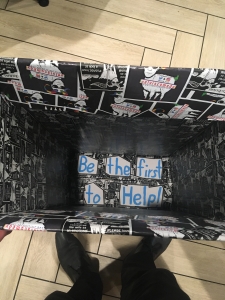 The first shelter Mujic performed in was in 2015 at The Salvation Army’s Tupelo, Mississippi location. While performing at a venue in Memphis, Mujic decided to visit Graceland, a suggestion from his father who is a devoted Elvis Presley fan. There were severe tornado warnings during his visit, so Mujic headed south and took shelter at The Salvation Army’s Tupelo, Mississippi location. He decided to do a set while waiting for the warning to end and found that he enjoyed performing for the people at the shelter.

“I was purposefully performing in places where you wouldn’t have stand-up comedy, and that was interesting for a while. I would go to Waffle House or Denny’s or other bizarre venues to perform. And I was like, ‘Oh, I’m taking cover at a shelter during a tornado warning. This will be interesting.’ Doing these things that I found weird had a pretty profound effect on me,” Mujic said. 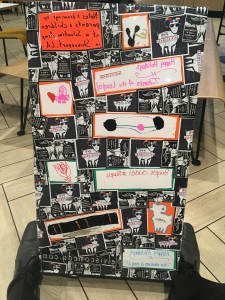 Mujic has reached over 80 shelters since December 2018 and is currently touring the Southeastern United States, visiting as many facilities as he can fit into his schedule. He just wrapped up his performances in Louisiana and Mississippi and is currently in Alabama. He likes to focus his travels to low-income areas, where he performs at the local shelters first and later performs at a local venue. He often hosts “socks and undies shows,” where people may bring socks, underwear, and personal hygiene products as admission to the show. Mujic also puts donation bins throughout the town at various businesses.

“The bins are cool. They have my logos on them, but intertwined are messages from different people I’ve met at shelters and soup kitchens after the shows,” Mujic explained.

Mujic takes about 2-3 weeks in each area, getting to know homeless individuals. He collects the items from his donation bins and delivers them to the people that he’s met along the way. He delivers items directly to The Salvation Army and other shelters if he’s received a lot of donations.